Our Founder, Jerry, Reflects on His Time Serving in Vietnam-- Sharing What Being a Veteran Means To Him

Our marketing department staff asked me to do a blog post on my Vietnam service in honor of Veteran's Day. Let it be known that serving in Vietnam was for sure not my idea.

I was drafted into the U.S. Army in September 1968, I was 19. Being a draftee during this era, there was a pretty good chance that southeast Asia was going to be your destination. After basic combat training at Ft. Benning, I was sent to Ft. Leonard Wood in Missouri to be trained as a combat engineer (Which is not a fun job). After a thirty day leave, I was sent to Oakland Army Base where I would depart for my adventure.

I arrived in Cam Ranh Bay, Vietnam on April 30, 1969. I was picked up and taken to my new company in Dong Ba Tinh, which was basically still Cam Ranh Bay. After arriving, I'm thanking my lucky stars! These are barracks, not bunkers. Later in my tour, I would be thankful that I lived in a bunker instead of barracks. 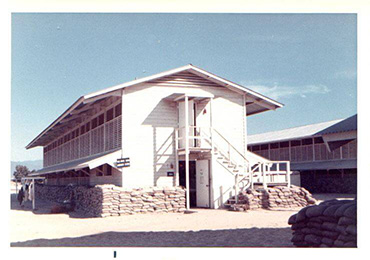 I go to the orderly room to report for duty and the First Sergeant asked me if I could type… “Yes Sir!”, I was happy to reply. Again I am thanking my lucky stars plus Miss Callahan, my typing teacher at West Side High School. The company needed a company clerk. Yahoo! So, now I am a company clerk living in stateside barracks. Not bad so far. This lasted about a week… until the actual trained company clerk arrived. Crap! Now what?

Staff Sergeant Rupert Pope claimed me to be the Operations Clerk, and this actually was a pretty interesting job at present-- Boring, but interesting. At least I am not mine sweeping or disarming booby traps (Some things a combat engineer does).

In another week, Sgt. Pope asked me to be his driver to go on a field trip. We had a convoy of the commanding officer, operations officer, and Sgt. Pope going to a little village by the name of Phu Quy, which was about 50 miles south of our location. At this point, I did not know the purpose of this field trip I was on. The village elders took us to an area that was on a slight rise in the middle of nowhere. Little did I know, this was to become my home for the next year.

On arriving back to Dong Ba Tinh the company was informed to start packing equipment and that we would be pulling out in two days. Wait, what? Where are we going to sleep and eat? Well being, I am with engineers--problem solved--We would build our own bunkers. In the meantime, we would take corrugated culvert halves and cover them with sand bags. We then put our sleeping bags in them-- Instant bedroom. Did I mention scorpions and very large spiders? It only took about two weeks for the bunkers to be built and they really offered more protection than the barracks.

The first things to be built were showers and latrines (outhouses). Water was transported from the river. Once the bunkers and mess hall (cafeteria) were built, things became livable. 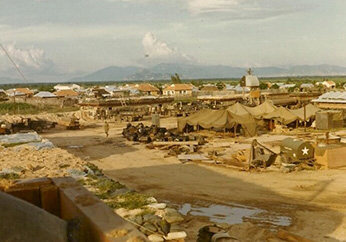 So for the next eleven and a half months, this would be home. The bunkers proved safe from almost nightly mortar and rocket attacks that were meant more for harassment than anything else. I was not exposed to the bloodiest conditions although nothing is secure in a war zone... We did lose a couple of guys during my tour, and quite a few were wounded.

After a couple of promotions, I went from Operations Clerk to Communications and was finally promoted to Sergeant and Head of Communications.

I mentioned that we lost a couple of guys during my tour... One of those men was a Spec 5 named Freddie Sherlin, from Athens, TN. My daughter married a Sherlin from Cleveland, TN. Several years had gone by before thinking of the name and it’s connection to my time in Vietnam. I thought about the relative closeness of Cleveland and Athens, so I decided to ask and that's when I found out that Freddie was a distant cousin. Small world.

Through the years I have seen photos and videos uploaded by veterans I served with and just recently ran across a video of us actually building our compound at Phu Quy. I did not see my face but recognized a lot of others.

I did not want to be in the Army and I surely did not want to go to Vietnam, but looking back-- I would not change a thing. I would like to dedicate this post to Staff Sergeant Rupert Pope. Because of his words and guidance, I came home a sergeant instead of a private. I can see his fatherly smiling face now.